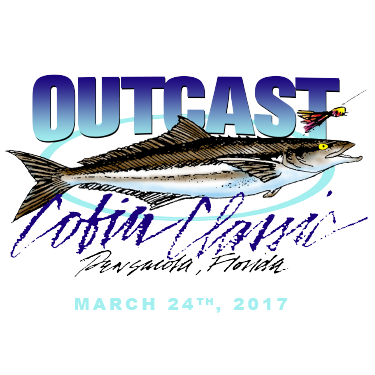 3 All fish must be weigh in on the day they are caught.

5. The Captains/Anglers meeting will be Thursday, March 23,2017 at the Sanders Beach Community Center located at 913 South “I” Street(Sanders beach).The doors will open at 6:30 p.m. and dinner will be served at 7:00 p.m.

7. Official weigh stations will be OUTCAST TACKLE and MARINE in Pensacola, HARBOR DOCKS in Destin, ANDERSON`S SEAFOOD in Panama City, and ZEKE`S MARINA in Orange Beach. Fish may also be weighed in at the Outcast Cobia Invitational weigh-in (at Tailfins Ale House and oyster Bar) March 31-April 2. Fish may be weighed in until 8:00 p.m. daily. Outcast Tackle and Marine will be open untin8:00 p.m., however the other locations may be close earlier. It will be your responsibility to know when your choice of locations closes. Remember all scale locations will close no later than 8:00 p.m.

10. Any protest must be presented to the weigh-master within 2 hours of the weigh-in of fish in question. No protest will be accepted after 9:00p.m. on the final day of fishing which is April 30,2017. A$500 (cash only) protest fee must accompany the protest application. In the event the protest is upheld, the fee will be refunded. If the protest proves invalid the protest fee will be forfeited.

12. All fish must be in acceptable condition. The tournament chairman or any committee member reserves the right to reject any fish entry because of poor condition, mutilation, or being frozen. The condition of the fish will be left up to the scrutiny of the committee. Their decision is final.

13.All fish must be caught on ROD and REEL. Fish caught by bicycle rigs, spears, traps, nets or any other entangling device will be disqualified.

14. the use of HARPOONS is strictly prohibited.

16. The use of illegal fish attracting devices (hereinafter called “FAD`S”) is strictly prohibited during the Outcast Cobia Classic. For tournament purposes, FAD`S will be defined as any permanent or non-permanent structure or device that is deployed into the Gulf of Mexico for the purpose of attracting fish to its location that has not met proper United States Coast guard and/or Florida Fish and Wildlife Conservation Commission guidelines. Participating vessels and/or individuals found to have participated in the deployment of, assisted in deployment of, and/or acquisition of coordinates of previously deployed FAD`S from any source will be disqualified from the Outcast Cobia Classic pending results of a polygraph test. The Captain/Owner of each registered vessel must sign a FAD rules Acknowledgement Waiver accompanied with the official Tournament Entry Form to be eligible to participate in the Outcast Cobia Classic.

18. In order to promote conservation and preserve the species: The Outcast Cobia Classic will limit all of its participants to weighing in a maximum of one Cobia per person a day. NO ILLEGAL ENTRIES WILL BE ACCEPTED. This complies with the State of Florida regulations at the time of printing. Any changes in the State regulations after the printing of this publication will be covered at the Captain`s meeting.

19. The Outcast Cobia Classic, in order to conserver the resources, has set a minimum weight limit to 45 pounds. NO ILLEGAL ENTRIES WILL BE ACCEPTED.

21. A small boat is 29 feet and under based on manufacturer`s designation.

22. All fish weighed may be subject to random gutting. Failure to allow a tournament committee member to gut a fish will result in the disqualification of the fish in question.

23. Only one prize per boat per division this includes the optional cash awards categories as well.

24. The Outcast Cobia Classic is under obligation and will report any violation of the minimum size lengths and possession limits of all fish involved.

26. All rules subject to change at the Captain`s meeting.