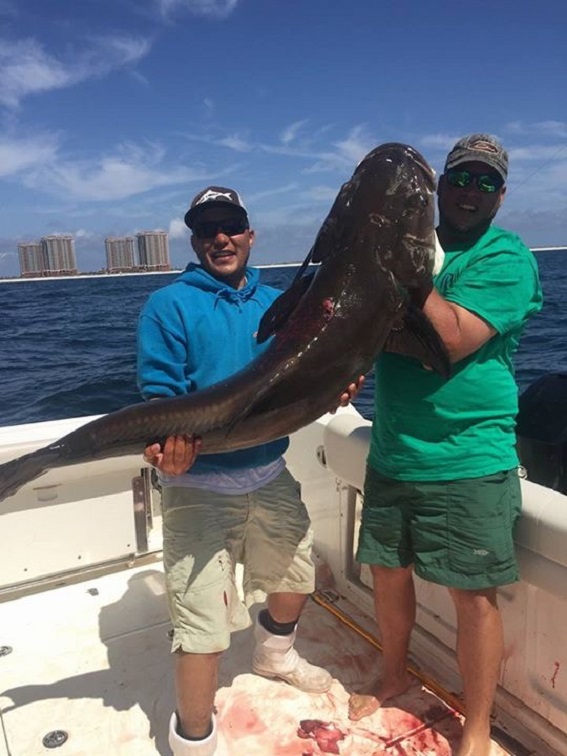 Inshore
The sheepshead reports have varied from one day to the next lately, but there’s definitely still some around Pensacola Pass if you’re willing to give it a little effort.
A few Spanish mackerel have started showing up out in the Gulf just off the beach so if you want to go after them just grabs some spoons or Gotcha Lures and troll around.
Fishing for speckled trout and redfish has actually been pretty good. Some trout are beginning to show up on the flats and your best bet for redfish is bridges or residential docks. This is a great time of year to fish with live shrimp since the pinfish aren’t too bad just yet.

Offshore
A lot of offshore anglers spend this time of year chasing cobia up and down the beaches and honestly the number of fish caught already is great considering the slow seasons we’ve seen the past couple of years.
If you’re going bottom fishing don’t forget that red snapper, amberjack, triggerfish, and gag grouper are all currently closed in federal waters, but amberjack remains open in state waters at this time.

Piers & Beaches
A few cobia have been caught on the Pensacola Beach Gulf Fishing Pier and Navarre Beach Fishing Pier over the past week. If you’re going cobia fishing on one of the piers just be sure to have a rod and reel that can cast a decent distance and a cobia jig.
Pompano and whiting fishing has been steady in the surf, but hopefully we start seeing a few more pompano. The bite has been about the same both east or west of Pensacola Pass, so just go to whichever beach is more convenient.

Freshwater
According to a couple different reports it sounds like the bass fishing has been great on the local rivers and lakes. It should only get better as we move into spring, as long as the warm weather sticks around.