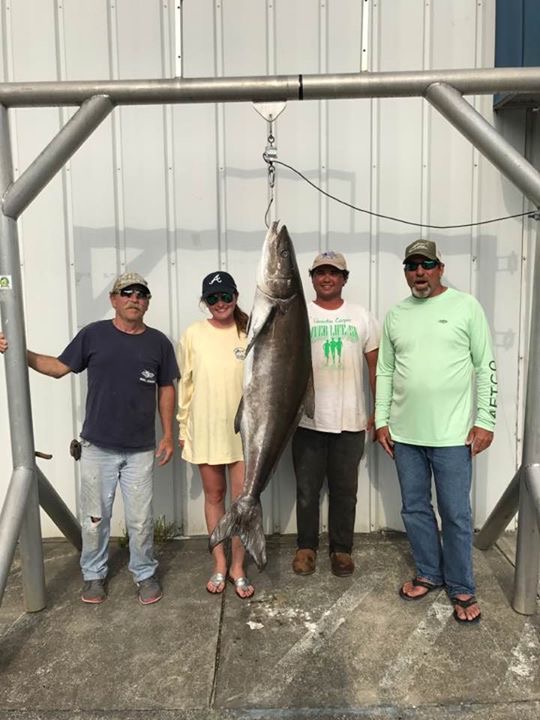 Inshore
Spanish mackerel have been a bit hit or miss, but still probably the best option for anglers looking for action inshore. You’ll want to look for them outside of Pensacola Pass down the beaches to the east or west right now.
Some flounder have shown up in Pensacola Pass, but you need good live fish baits and to catch the tide moving to catch them.
Santa Rosa Sound has been the place to be lately if you’re looking for some nice sized speckled trout. You can catch them on lures, but live croakers or finger mullet are hard to beat.

Offshore
A few cobia are being caught, but it’s nothing like we should be seeing in what is typically known as the best part of the season.
I know I say it every week, but remember that red snapper, gag grouper, and triggerfish are closed in state and federal waters and amberjack are closed in federal waters. If you’re headed offshore looking for bottom dwellers to keep you’ll want to target vermillion snapper, scamp, and black snapper.

Piers & Beaches
Don’t expect to catch a limit every time you go, but pompano fishing has been steady and there is also a good amount of whiting in the surf right now. Fresh peeled shrimp allow you to target both whiting and pompano, while sand fleas primarily produce pompano.
Cobia, pompano, and king mackerel continue to be what most anglers are after on the Pensacola Beach Gulf Fishing Pier and Navarre Beach Fishing Pier. The action has been different from one day to the next, but this is a great time of year to pier fish.

Freshwater
According to a few reports it sounds like bass and crappie are the primary target for most anglers hitting the local rivers and lakes. Overall the bite has been steady and the weather has made for some enjoyable fishing.